I have finally joined the preprint bandwagon (which is embarrassingly late, given how much I am in support of open science).  Here are four recent preprints that are finally free to the public.  Congratulations and thanks go to the four other PIs, one postdoc, one grad student, and six undergraduates who contributed to these papers.

Integrating Protein Localization with Automated Signaling Pathway Reconstruction
Ibrahim Youssef, Jeffrey Law, Anna Ritz
Full version of BIBM 2018 conference paper, under review
Big Question: When we hunt for protein interactions that are potentially involved in cellular signaling responses, can we use information about where the proteins are localized in the cell?
Short Answer: Yep.  We modify an existing algorithm to find paths within large protein protein interaction networks that respect where we expect proteins to be expressed in the cell.

Distance Measures for Tumor Evolutionary Trees
Zach DiNardo, Kiran Tomlinson, Anna Ritz, and Layla Oesper
RECOMB-CCB 2019 conference paper
Big Question: Suppose we have two “options” for how an individual’s tumor has evolved, in terms of the order of acquired mutations.  How should we compare these options?
Short Answer: We need to compare both the grouping (labeling) and the relative order of acquired mutations in evolutionary time – our distances account for these features.

Improved Differentially Private Analysis of Variance
PETS 2019 conference paper
Marika Swanberg, Ira Globus-Harris, Iris Griffith, Anna Ritz, Adam Groce, Andrew Bray
Big Question: The Analysis of Variance (ANOVA) statistic is heavily used in contexts where user privacy is imperative (biomedicine, sociology, and business).  We already developed an algorithm with differential privacy guarantees on datasets of a certain size – can we improve the method so we get this guarantee with fewer data points?
Short Answer: Yep.  In fact, we define variants of the ANOVA statistic with good differential privacy guarantees.

…and the pasta. In non-work-related news, I just returned from a family vacation in Italy! We saw great architecture and art (in addition to the pasta, wine, and gelato), walking about 10 miles a day on cobblestones. 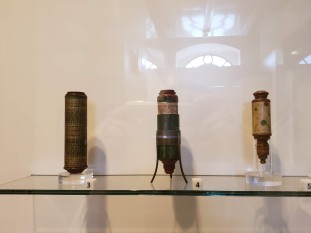 Finally, good luck Reed thesis students as they wrap up their senior theses!  Only a few short weeks until Renn Fayre….